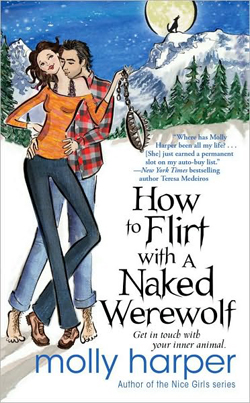 Back Cover Copy:
Even in Grundy, Alaska, it’s unusual to find a naked guy with a bear trap clamped to his ankle on your porch. But when said guy turns into a wolf, recent southern transplant Mo Wenstein has no difficulty identifying the problem. Her surly neighbor Cooper Graham—who has been openly critical of Mo’s ability to adapt to life in Alaska—has trouble of his own. Werewolf trouble.

For Cooper, an Alpha in self-imposed exile from his dysfunctional pack, it’s love at first sniff when it comes to Mo. But Cooper has an even more pressing concern on his mind. Several people around Grundy have been the victims of wolf attacks, and since Cooper has no memory of what he gets up to while in werewolf form, he’s worried that he might be the violent canine in question.

If a wolf cries wolf, it makes sense to listen, yet Mo is convinced that Cooper is not the culprit. Except if he’s not responsible, then who is? And when a werewolf falls head over haunches in love with you, what are you supposed to do anyway? The rules of dating just got a whole lot more complicated. . .

My Thoughts:
How to Flirt with a Naked Werewolf had me laughing so hard I got more than a few strange looks from my husband. Molly Harper really knows her way around a good punch line, and this book was a shining example. She also knows how to build an engaging story. From the first descriptions of Grundy, Alaska she pulled me into the world of the book. I wanted to hang out with Evie and belly up to the bar in the Glacier.

Mo is a strong, independent woman. She’s open-minded but not stupid and has no trouble standing up for herself. I enjoyed her joking and sparring with the various characters in Grundy. As for Cooper, what can I say? Sexy, tortured, secretive, protective. Did I mention sexy? Mo and Cooper have great chemistry too, and the sex scenes between the two of them are hot. Harper did a great job of integrating her wolf culture with Cooper-as-guy. She really developed a believable werewolf without his sexiness simply hinging on his looks. I really enjoyed Cooper’s personality. He’s a little on the possessive side (okay, that might be an understatement), but it didn’t bother me as it fits with his wolfiness.

The plot includes a mystery which Harper executes beautifully. I also really liked the development of the love story. The tension and the attraction between Cooper and Mo is palpable right away, and Mo’s confusion about Cooper builds steadily so that when we get that great payoff, it’s really great. There are a couple of times where I thought, “This is it! Now they’re going to get together!” but Harper is only teasing, tantalizing the reader for the yummy big event. There were quite a few twists that I didn’t expect, but they fit with the story and added a layer of depth that I really enjoyed.

While the resolution of the book doesn’t come easy to the characters, it felt a bit fast for me. That might be because I knew there was a second book in the series. Since I didn’t want to spoil this book, I didn’t even read the cover copy of book two, so I didn’t know it’s not about the same couple. I was expecting a build to an open ending that would lead to further relationship developments for Cooper and Mo, and I was really excited for that. So when their story was wrapped up, as wonderful as the ending was,  I was still a bit bummed. On the upside, I’m pretty psyched for book two. Maggie is kind of a mess, so she’s a perfect candidate for a messy romance. Thankfully, I won’t have to wait long. Book two, The Art of Seducing a Naked Werewolf, is out next month!